In an attempt to understand who’s accessing our platform I was recently looking through our analytics data.

Given the times were living, and the amount of mistakes I’ve made while developing and promoting this platform, I thought applying some new learnings and insights I got can start with looking at our existing data.

Many companies focus extensively on user acquisition and forget to cater towards the users they already have. This is something I really want to change.

I decided to do age and gender splits since such categories are easy to delineate and compare. And I had some questions.

What age groups are looking to shift from office-based to remote?

Although this might be a bit far fetched, since I'm making the assumption that those people are switching from office to remote, but if we see these numbers go up very fast it might be a tell of such a trend.

What age groups are brave enough to switch jobs?

Statisticians might slap me with their thick math and statistics books but it takes courage to go for a new job. I know many people who are miserable with their current jobs but they don't have the guts to learn something new, update their skills, and drop that resignation letter on their bosses' desk.

Whether you like it or not, the main burden of parenthood resides with the mother. Because of that, many women have trouble staying in the field of work while pregnant — mostly because companies have found new and creative ways to get rid of women, either by restructuring the positions they occupy, and other shenanigans.

I've heard this a couple of times, of course, in hushed tones, that women are a liability to companies because they can get pregnant. As appalling as it is, it is also true.

But even after the maternity leave is over and they must return to work, there are no support systems for women to be easily re-integrated in the workforce. They actually start at a disadvantage, having lost their competitiveness while caring for the infant.

I've talked to four such women during the pandemic and two of them were putting in the hours necessary to stay relevant in their field, even though that should've been time dedicated to raising their infant.

Below are a couple of graphs which tell the story on WeRemote.Eu's side. 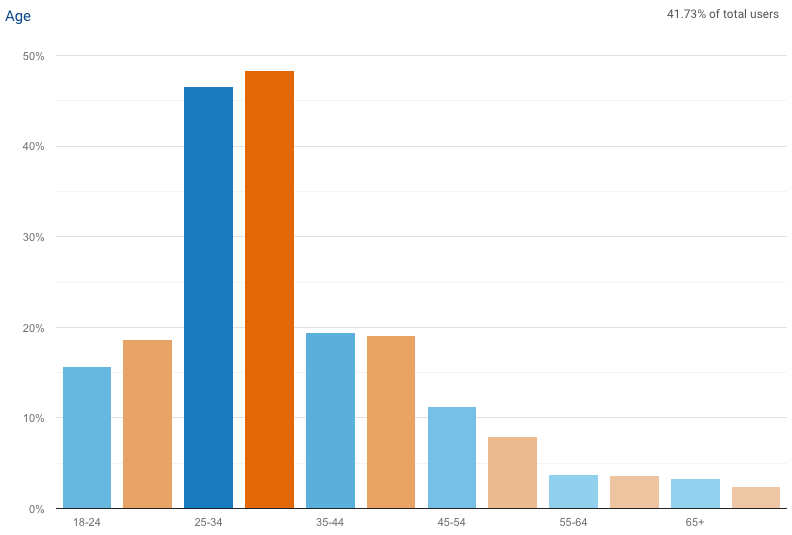 From the graph above we can definitely tell that the biggest interest in working remotely is in the 25-34 years age group. If I were to give my opinion on why the data looks the way it looks, I'd say in that age group you get the people who were among the first to learn at an early age that we shouldn't be bound to a single job, a single company, all our lives.

The age group could also include young parents and people who recently decided they could live just as well in their home city, and avoid the overcrowding, and the long commutes of the big city.

On an even more personal note, I truly believe one of the reasons for the decline of smaller cities, and industrial cities was the sudden availability of desk-work which required people to relocate to the big cities.

This was the involuntary (or not so involuntary) brain-drain which led to fewer taxes being paid in certain areas, which led to fewer funds from the central governmental authorities for said areas, fewer investments, infrastructure decline, aged population and many other issues I probably can't even think of.

So this data could tell many stories. As a matter of fact, you can make statistics tell any story you want. 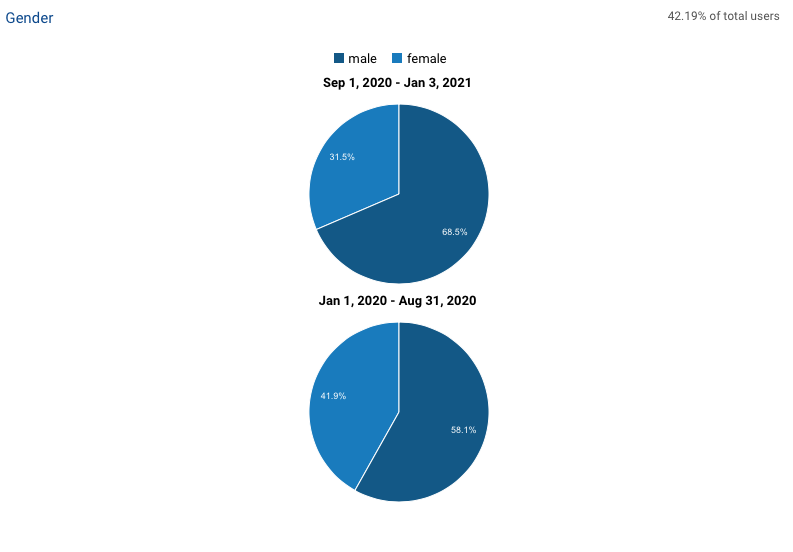 As you can see between January and August 2020 there was quite a balance between the male and female jobseekers on the platform but as the pandemic ran its course the percentage started skewing more male.

It is true that the platform's visitor count has decreased quite a lot in the autumn, mainly because it is built and run by two humans who have also been affected by the pandemic, but this percentage for now is not something I could interpret or even provide an opinion on.

Maybe one opinion, though: in the beginning of the pandemic, women started looking for remote jobs, precisely due to what I outlined previously, which was that the main task of child rearing falls on the woman.

Unfortunately, the pandemic has put a lot of strain on families, since people have had to work while their small kids were at home, either getting through some sort of online education or simply being kids.

Being more cautions than men, and also thinking a lot more about the stability of the future, women could've been the first to start looking for remote jobs in large numbers, thus, the difference in percentages.

So here's the full picture below, containing the two graphics above, side-by-side.

I am in no way a statistician, and the only data I rely on to write this article is from our own analytics. If you have more information on the topic, or are an expert in the field, I'd love to talk to you, so hit me up at [email protected] or on Twitter (@oprearocks).